How the Voice is Made.

The voice is an exceedingly complex organ, whose functions are only just being modelled by advanced computer programs. It is formed by non linear, self sustained oscillation. How it evolved is a matter of conjecture, but the gift of speech and language is unique to man. The singing voice is an extension of the function of speech. The voice is produced by a combination of muscular and breath action and greatly enhanced by the flexible vocal tract directly above it which is resonant tube closed at one end. 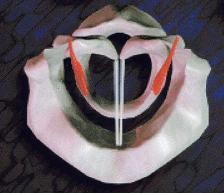 The voice is made of human tissues which oscillate on a stream of breath. These tissues are located in the larynx, which has evolved to take up a lowered position above which sits a long and pliable tube. Small muscles and ligaments are placed bilaterally inside the larynx, which forms a protective cage. These bilateral structures, collectively called the vocal cords, can be abducted (pulled apart) in order to let air pass in to the lungs, and adducted (pulled together) when we wish to speak or sing. (The picture shows the tough outer thyroid cartilage; the aryeppiglotic muscles or vocal cords; the cricoid cartilage under the thyroid cartilage; the arytenoid cartilages; and, in red, the cricoartenoid muscles which help to adduct the vocal cords. Pass the mouse over to see an animation of adduction and abduction.) Then a stream of air passing over the edges of the vocal cords causes them to ripple and produce tone. The tone is consciously modified and amplified by the space the singer makes in the pharynx and the mouth. Further tonal modification may be made by the sinuses, which are more inflexible in nature. They add a degree of nasality to the tone. By shaping the mouth and moving the tongue the speaker or singer can produce vowels. Consonants are made principally by the tongue, teeth and lips; though some consonants are produced gutturally by the soft palette and the back of the tongue.

Early voice researchers (Vennard and van den Berg) explained that vocal tone was caused by a simple myoelastic and aerodynamic actions, which relied on the Bernoulli force to cause oscillations in the vocal cords. This tone was then filtered and amplified by the throat, mouth and perhaps the nasal passages above the larynx. The Bernoulli force, was central to their thesis. The Bernoulli force is caused by the flow of air or liquid over a surface which results in a pressure differential being produced which can move objects. In the case of an aeroplane, the wing tip is shaped so that the air passing over it moves more quickly than the air passing underneath it. The result is that air pressure above the wing is lower than air pressure below it and lift is created pulling the aircraft up. In the case of the larynx, air passing over the vocal folds created a lower pressure zone above the cords and pulls them together. Then the air pressure directly below them quickly rises and causes them to be pushed apart. This cycle of adduction and abduction, pulling and pushing, result in puffs of air which can be heard as an audible tone. Using an oscilloscope, vocal scientists have observed the very complex wave-like movements which the vocal folds are able to make during singing.

However this thesis does not explain why the voice can be created and sustained by a force which is negative, when breath pressure must always be positive. The positive force would cancel the Bernoulli force and the voice would be dampened. Empirical experience shows that this does not happen and vocal tone can be sustained. Neither did the simple myoelastic and aerodynamic theory explain the presence of harmonic partials in the sung voice (as recorded by Helmholtz) and the presence of inharmonic partials in the spoken voice (as recorded by Scripture). William Vennard did concede that it was possible that the voice was capable of producing both harmonic and inharmonic partials. For this reason the myoelastic and aerodynamic theory has been judged as inadequate and an incomplete explanation.

Empirically, singers have known for a very long time that the creation of a resonant space directly above the larynx is essential to good singing: the raised soft palate and the lowered larynx are part of a classical vocal technique. This creates a region directly above the vocal folds where breath pressure will decrease because it is moving more slowly. The vocal folds behave as if the pressure above and below remains constant. The vocal cords are as stiff when the pressure of breath is high as they are when the pressure of breath is low. This asymmetry of tension and pressure allows oscillation to be sustained.

The vocal folds consist of several layers: The surface layer is the epithilium, the next layer is the lamina propria (with Reinke’s Space, an elastic layer and a deep layer of collagen fibre) which forms the vocal ligament, under these layers lies the vocalis muscle. Given the different properties, masses and densities of these layers, the possibility for a number of asymmetrical actions and pressures now exists which would produce different actions which are are wave like or puff like, allowing complex harmonic and inharmonic resonances to be created and sustained. Wheatstone and Helmholtz made the analogy of the glottal lips behaving like strings, based on their studies of the singing voice. They favoured a theory of harmonic resonance. Another group of scientists, Willis, Herman and Scripture observed that the glottal lips produced puffs of air in the manner of a wind instrument. They proposed a theory of inharmonic resonance. William Vennard suggested that both principles operate simultaneously. The most recent research conducted by Ingo Titze, states that voice is produced by an exceedingly complex vibratory mechanism which probably can produce both inharmonic and harmonic resonances. The historic observations made by Lilli Lehmann, about air currents, or ‘Wirbeln’, which appeared to fly in the face of science would appear to have been, in part, validated, and recently voice researchers have turned to aeronautic engineers for help, because the operation of the larynx is quite similar to the jet engine: both create vortices which produce complex sounds.

Furthermore, empirical experience proves that forming a direct connection between the breath and the larynx is ineffective. (Too great a breath pressure causes the voice to stall.)  If the breath is used indirectly,to support and brace the posture, then the breath pressure at chest level would be greater than that of subglottic level , which would assist support. The best breath control is obtained by the technique of appoggio, where the breath is used to support and brace the posture and the locus of breath placement, is felt no higher than the midpoint of the sternum. This was an important aspect of technique, which Lilli Lehmann highlighted in a book she wrote in 1902. Her intuition and empirical knowledge is more valuable than was thought fifty years ago.

What are Vocal Registers?

Vocal registers have been recognised since 1250, by the different sounds each register could produce. In 1841, Manuel Garcia the Younger defined them in his 'Traite' as 'a series of consecutive and homogenius tones going from low to high, produced by the same mechanical principle, and whose nature differs essentially from another series of tones produced by another mechanical priciple. All the tones belonging to the same register are consequently of the same nature, whatever may be the modification of timbre or of force to which one subjects them.'

In 1863 Hermann Helmholz, in his book 'On the sensations of Tone' defines a register as, 'a series of tones produced by the same mechanism'. He proceeds to identify changes in the thickness of the vocal folds, changes in the vibratory pattern and changes of laryngeal position. Manuel Garcia identifies three registers: chest, medium and head. (He appears to ignore the falsetto voice.) Helmholtz identifies five registers: 'lower thick', 'upper thick', 'lower thin', 'upper thin' and -in ladies only - 'small'. The small register might conceivably be referring to a 'whistle' register or a 'falsetto' voice. Today the use of the word 'register' is taken to refer to the resonance phenomenon which is only apparent to the singers and helps him or her to achieve a desired tone at a given pitch.

A singer will understand the term register from the resonance which they feel and hear, whereas a speech and language therapist or pathologist will understand the term register refers to the vibratory characteristics of the vocal folds, which are vocal fry, modal voice, falsetto and whistle registers. As the singer cannot feel the vibratory characteristics of the vocal folds, there exists a potentially confusing dichotomy between the scientist and artist. Some singers and teachers avoid the use of what they see as confusing terminology and create incremental changes which they call 'gear changes'.

Chest and head and passaggio

Historically, singers have preferred to concentrate on two vocal registers, chest and head (or speech and sob). The sensations of tone arising from each are clear and distinct. They are adjacent to each other and have an area of overlap, which is called the 'passaggio'. This region of voice requires a blended production which probably uses a mixture of speech and sob action. The singer by experience learns to coordinate the muscular and breath action to avoid an abrupt change of tone at the passaggio break. It is accomplished by trial and error, since the problem cannot be solved by a one size fits all voices solution. The shape and character of the musical phrase will also dictate where the singer changes register. It is not an exact science and a one size fits all voices is not appropriate.

Garcia and passaggio Garcia placed this passaggio between e and f, above middle c, in all voices. Most authorities accept this as accurate. William Vennard and van den Berg attribute the cause of the noticeable break which can occur to the inherent resonance of the bronchotracheal tract, directly below the larynx. As a rule of thumb the singer should not habitually take the chest register too high too often, because it is fatiguing and renders the voice liable to injury and vocal problems which cannot be resolved.